What skills have you developed since working with Open Theatre Company?

Daniel: I have developed some acting skills as well as learning how to use props and facial expressions. I also learnt to listen to opinions, rating and discuss with evidence.

Sally: When I first heard of Open Theatre it was at Dan’s primary special school when he was 6. His school diary told me about what Richard had done in his sessions. More importantly despite him at that time having limited speech and minimal recall he demonstrated through actions. The day before on his visual timetable he would see a hat and a feather to illustrate tomorrow was Open Theatre day, and he just beamed. I came across Open Theatre as a member of staff in a primary school and saw from a different perspective the children again exude utter enjoyment and enrichment to their learning. As if by fate Dan again is with OT and has as a young man grown personal strength to be him, to be creative, to try and embrace ‘thinking outside the box ‘ skills to be accepted and respected.

”The children again exude utter enjoyment and enrichment to their learning.”

What skills are you good at? And, what skills would you like to learn next?

Daniel: The skills I am good at are known to be carpentry as well as art and design, which is useful for creating the set for performances, and it also helps with making logos, advertising and animation. The skills that I’d like to develop next are to learn to act out on the stage as well as doing voice overs and using the lighting.

Sally: Dan is kind, honest,great memory, and a team player. To channel his rigid thinking and explore new topics through the arts. 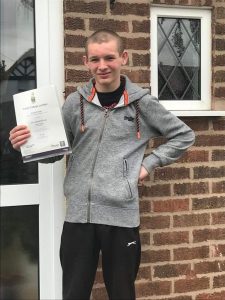 What skills are important for young people to learn?

Sally: Acceptance , uniqueness. The skills to challenge and voice opinions. To champion inclusiveness. To know their rights. They need to have clear guidance on employment finances, career channels, safety for themselves. To build trusting friendships and learn working environment etiquette, skills and rules.

Daniel: What I would like to learn in the next year is to travel safely and independently, be myself as well as working with people as a grown up.

How has COVID-19 affected the ability to learn these skills?

Daniel: This crisis has affected me in an emotional way because it refrained me from working hard in school. The risk of going out and about was unbearable for me because of the way social distancing was introduced. But on the plus side, zoom has helped because I was able to see my friends again.

Sally: All the social cues are gone with masks, all the politeness and manners, (eg. shaking hands) are gone. Safeguarding, walk this far apart, walk into the road don’t touch the crossing button etc. when you’re worried no longer can you ask for support as easily , rules are ever changing. Its all different. Abrupt and with no structure.

”The risk of going out and about was unbearable for me.”

How can schools and organisations help young people to be more resilient to changes caused by the current crisis, and the world of work in general?

Daniel: If it wasn’t for this crisis, I would’ve had help from people around me.

Sally: Communication. Some of the barriers through anxiety of an environment in some instances are reduced through zoom/teams.So many opportunities to rapport build engage with less expectation can be done informally from home. Even a telephone conversation or letter as well pictures can stop isolation and shared experience naturally occurs. The biggest learning has to be that staff and parents and clubs need to be all included in each other’s journey for SEND young people especially they are a piece of a jigsaw to the young persons being and success. Then each aspect has a strategy…a plan, a video, power point, teams,small online groups, any combination of mediums to maintain continuity.

Unmuted: Brum-Lahor was the name of our project which involved a partnership between Open Theatre and MAAS Foundation in Lahore,... END_OF_DOCUMENT_TOKEN_TO_BE_REPLACED

END_OF_DOCUMENT_TOKEN_TO_BE_REPLACED

Sebbie Hall a teenager from Lichfield, Staffordshire who struggles with learning difficulties, has performed a random Acts of Kindness every... END_OF_DOCUMENT_TOKEN_TO_BE_REPLACED

Every Monday I drive down to the Forest of Dean to run Open Theatre sessions at the Heart of the... END_OF_DOCUMENT_TOKEN_TO_BE_REPLACED

We started rehearing The Twisted Tale of Hansel and Gretel in January 2020 in a world where we still hugged,... END_OF_DOCUMENT_TOKEN_TO_BE_REPLACED