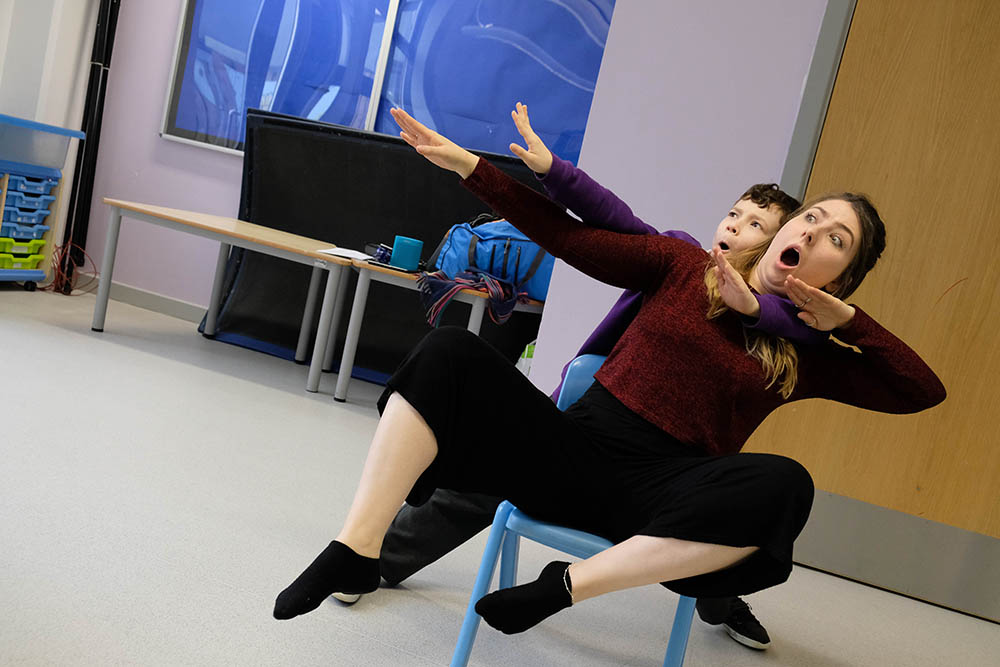 Back in January the Open Theatre family welcomed a new member of staff – Carl, our Associate Director for Research & Digital. Joining a 30-year old company can be quite daunting, there’s a lot to learn and a lot of history to catch up on. One of the first things Carl did in his new role was sit down with our Director and interview him about how the company came about, and what the Open Theatre methodology is all about. We typed up their little exchange, we hope you find it interesting!

C: So, do you want to start by talking about the 5 values of the company?

R: Well, you should know them by now!

C: I know, I do! But you talk so much better about them.

R: Okay, alright. So, the 5 values are: Creativity, Authenticity, Joy, Empathy, and either “get-up-and-go” or Enterprise. Enterprise doesn’t quite fit as a word, but it’s easier to say

C: And where did the work all start?

R: It started working with the Shysters (A new theatre company of actors with learning disabilities), trying to create meaningful theatre, and recognising that very single traditional theatre making process would not work unless it was translated within that context. There are conventions we take for granted in our communication styles, the way we move our bodies, ask questions, which aren’t there with YPWLD. Because they don’t construct narratives about themselves in terms of how they live and how we are in the world in the same way. Everything we do is built around those narratives, you get to the point of forcing those narratives onto the people you work with, so ultimately all of that had to go out of the window and we had to start from scratch. I tried lots of things, but it wasn’t until I brought a speaker in one day and we just started responding to music that we really started.

C: Why do you think music is so important?

R: Because words are traditionally the way we construct narrative – music allows us to explore different stories, narratives, experiences within those values – they liberate us. Music is a shared language.

C: You also use copying in your work, how does that work?

R: Because through copying someone you get to the truth of who they are – you’re reaching out to somebody to explore, connect and understand who that person is, through that process of becoming someone else, and you do that primarily through copying, and again it’s primarily a physical thing, you’re not asking “Who are you” – you’re putting yourself in someone else’s shoes quite literally.

R: Words are social constructs with multiple meanings depending on your personal narratives. Working non-verbally, it’s a more democratic and open space for communication. We assume that we understand everything through words, but actually – 5% of what we understand is through what we say, 10% is how you say it, the rest is body language. Also, this is a bit philosophical, you cannot know who you are in isolation, only in connection with other people, other spaces. So this is my journey as well as the young person’s – the things I think I can’t do, I can – and the other way around. It’s only through interaction that you learn who you’re capable of being. If you limit that to words, you limit your interaction with the world. We deny YPWLD the interactions, we are limiting their potential, their possibility – themselves. It’s important to validate the 85% of interaction.

C: I think a lot of artists and practitioners have the idea that they wouldn’t know what to do with something unexpected – or even negative happening. How do you deal with that?

R: You have to view it as an offer. Offer – comes from improv, if somebody does something, you don’t have in your response “You shouldn’t have done that” – everything that happens is an offer. A child looking away from you is an offer. If a child pees in the room – maybe I can’t take that as an offer, but I’m also not going to judge it as a good or bad thing. Work with what’s being offered in the room.

R: Never go into a room trying to make a child “better”, wanting to engage, interact, wanting to be together. If you go into a room aiming to achieve that, you actually interfere, you disable yourself, your intent is wrong. Go in and play, discover, find out – in that process you start achieving. I rarely go in with plans, I go in not knowing what will work

C: Last one – I promise. Could you talk briefly about trust?

R: Trust is fundamental – and it’s being done from the moment you walk into the room. You build it by being honest, authentic, open, vulnerable – being real. Being real in your response to whatever a child is doing. Doing things that are joyful is a way of building trust. You have to be all the things you want other people to be – to build trust you have to be trusting.

We hope you all tuned into Switch Radio yesterday to hear The Party Animal played live on the radio for... END_OF_DOCUMENT_TOKEN_TO_BE_REPLACED

Meet Mark, a determined and misunderstood young lad on the Autistic Spectrum who, believing that a party animal is a... END_OF_DOCUMENT_TOKEN_TO_BE_REPLACED

With less than a month to go until the premiere of Tom N Rob: Break Free, Bethan Ball has... END_OF_DOCUMENT_TOKEN_TO_BE_REPLACED

Last month, we brought our new immersive performance “Search for Second Star” to the The REP. After a few weeks... END_OF_DOCUMENT_TOKEN_TO_BE_REPLACED

Open Theatre is looking for a friendly, efficient, experienced Production Manager and/or Touring Technician for our national tour of Open... END_OF_DOCUMENT_TOKEN_TO_BE_REPLACED