‘Ronnie & Johnny’ A brand new Brummie sitcom with a difference!

Ronnie & Johnny is a sitcom with a difference. Sure, it has all the classic hallmarks of a TV sitcom; two best friends living together, sharing their lives, their bathroom and christmas. So what makes Ronnie & Johnny so special?

It’s written by and stars ‘sit down’ comedian Rob Bate, an emerging performer based in the West Midlands. He and his best friend Ben, became friends at primary school after being paired together as the only wheelchair users. Both Rob and Ben star as the title roles in Ronnie & Johnny.

They both have a longstanding interest in drama and comedy, and did a BTEC in Performing Arts at College. Rob then began performing and became a member of One of a Kind with Open Theatre Company. Rob also works with Spectra, a performances project for artists with disabilities.

There have been other sitcoms and TV shows written by and starring a disabled character, but Ronnie & Johnny goes one step further. The cast of Ronnie & Johnny is almost exclusively acted by neurodiverse and/or disabled actors, making the sitcom a real stand-out in British comedy. 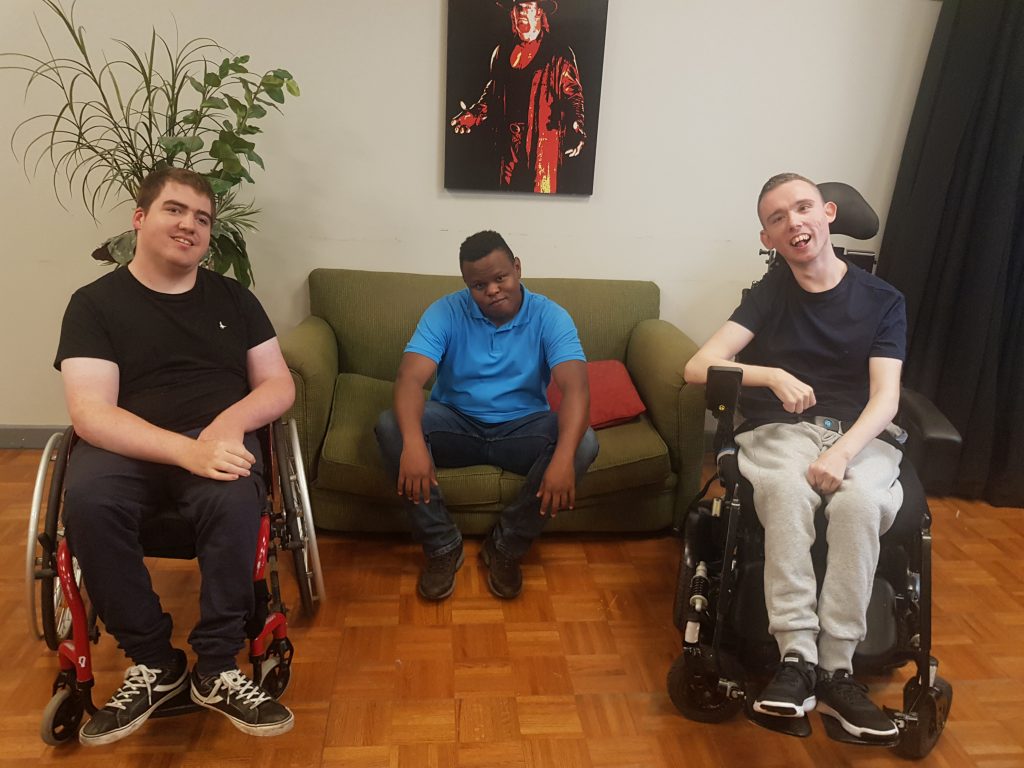 The casting was done by director Marlien van Liempt from Open Theatre Company. As Open Theatre works with young people and adults with learning disabilities and/or autism they have been involved in supporting Rob in writing and producing the series.

The nature of Open Theatre Company’s work also meant the casting was a natural process, fitting actors to their characters because of who they are as performers not necessarily because they have a disability or are neurodiverse.

One of the unique and refreshing elements of Ronnie & Johnny is that although it is about living with disability, the show’s characters and plot lines are not there to ‘make a statement’ but to tell a comedic and sometimes uncomfortable truth about the lives of the lead characters and the people who share their world.

Ronnie & Johnny was filmed in Birmingham at The Crescent Theatre and Trefoil House by a small creative team and cast. It was a labour of love and a real adventure into the unknown for all involved. The end result of 3 episodes (including a Christmas Special) are a real achievement for the cast and crew and is an exciting reflection of what can be achieved by learning disabled/neuro-diverse artists in the West Midlands! 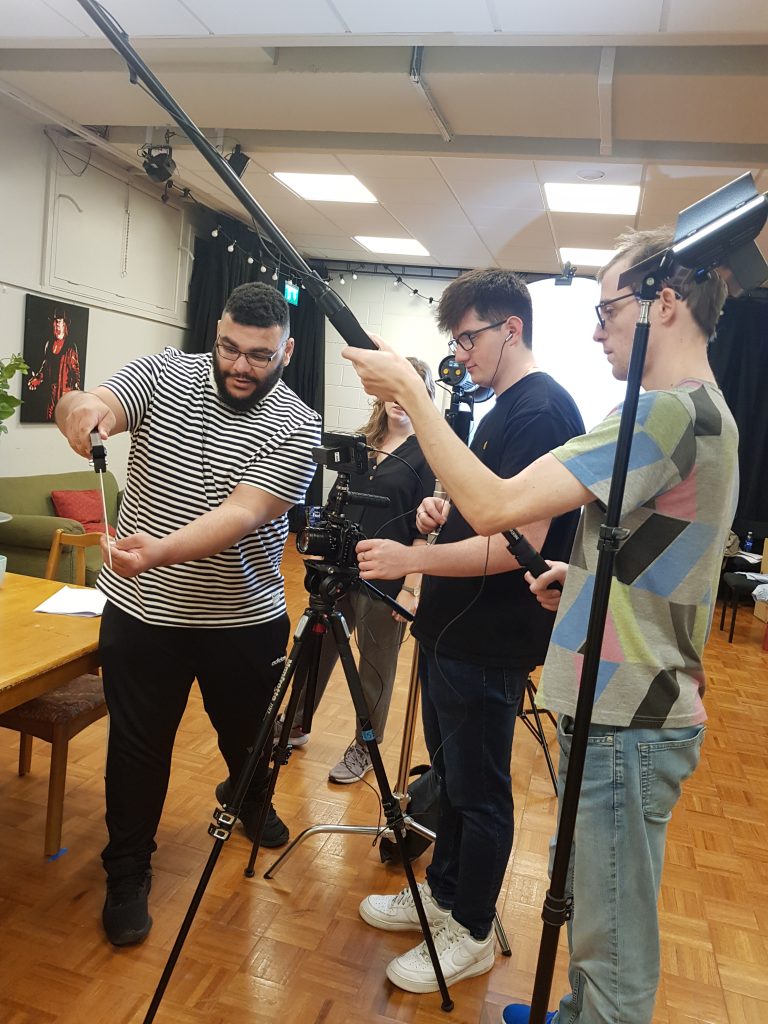 Filming on set of Ronnie & Johnny

To find out more about the process of making Ronnie & Johnny, we decided to ask Marlien and Rob a few questions about what it was like to make such a unique show in 2021, another challenging year for the creative industries.

Marlien directed all 3 episodes and worked closely with Rob to bring his vision to life. Here’s what she had to say about the experience…

What did you think when Rob first came to you with the idea of Ronnie & Johnny?

I knew Rob has this amazing sense of humour, because we’ve been doing drama together for a couple of years now. But I had no idea he was such a good writer. He just emailed me this script one day and it made me laugh out loud. I think I definitely got some stares in the Hippodrome green room for laughing uncontrollably. I thought it was so well-written and so funny. And I remember immediately thinking: this needs to be made and seen by people.

What was it like to film with two lead actors who were friends in real life?

These two are such a pain in the… No just kidding, They luckily don’t get up to as much mayhem in real life as their characters in the show, but it’s impossible not to have a good time when they’re around.  Rob and Ben have such a strong friendship, they only need half a word to communicate.

How was the experience of filming with a diverse group autistic and learning disabled actors?

It was a lot of fun.  Everyone was very intuitive when it came to acting. It also helps that we all know each other so we could play around and have a good time during filming. If it made us all laugh, we knew we were on the right track.

Why is this sitcom different to other sitcoms people have seen before?

Rob’s got a very natural sense of humour and has written something from his own perspective. I think at the moment there’s a lot of emphasis on trying to write inclusively for people with disabilities, but here you have a whole team of people who are so unique and talented and are not there to make a statement- and through that actually make a really big statement. The series portrays the life of these two lads and their carer in a very honest, yet hilarious way.

What scene was the most fun to shoot and why?

The Christmas dinner in the Christmas special! Because most of the cast was there and it felt like Christmas in September.

What do you want people to take away from Ronnie & Johnny?

I want them to have a good old laugh as well as a better understanding of the lives of people with disabilities.

What were the biggest challenges of shooting these 3 episodes from a production point of view?

Filming in tight corridors with two actors in a wheelchair was definitely a challenge! But once we got going it was all pretty smooth. I just wished we had a bit more time. It’s been quite ambitious to film 3 episodes in 7 days. But hey, it’s a pilot right? We we worked really hard to make Rob’s vision come through and get these episodes out there. And personally I want him to land a contract with a major broadcaster, because he deserves it. And maybe he can insist on taking us all with him.

Rob and Ben as ‘Ronnie & Johnny’ on set

How would you describe Ronnie & Johnny as characters?

Two outgoing people who aren’t restricted by their disability.

Why did you want to make this sitcom?

One of my carers flippantly said about me and Ben being very funny in a show. Ben said it wouldn’t get very far so that motivated me more. (Now you can see why the relationship between Ben and Rob was such a great inspiration for a sitcom!)

Was the filming process what you expected it to be?

Truthfully I was going in blind, I had no expectations because I had no previous experience, however, I thoroughly enjoyed

What was it like to work with the cast and crew?

It was a lot of fun and a good experience, I had worked with Ben lots of times but never professionally like that, I enjoyed seeing the characters come to life with everyone’s personal spin

Why should people watch Ronnie & Johnny?

Because it is different and unique, it has not been done before where it’s based on true stories with 2 disabled people

Sound like Ronnie & Johnny is your kind of thing? You can watch episodes on YouTube from Monday 24th January 2022!

To find them visit our YouTube channel here: https://www.youtube.com/channel/UCWLMlEic39ngzHDO7fzZw3A

If you’re reading this before Monday 24th Jan you can get up to date reminders of each episode and watch the trailer by signing up to our mailing list here: https://mailchi.mp/opentheatre/ronnie-johnny-sign-up

END_OF_DOCUMENT_TOKEN_TO_BE_REPLACED

Hello all! We hope you are keeping safe and well in these confusing times. We thought that the second blog... END_OF_DOCUMENT_TOKEN_TO_BE_REPLACED