An outdoor daytime performance with The Shysters on the main stage between the new and the old cathedrals in Coventry. It was something that Richard Hayhow and Kathy Joyce worked together on. Matt Bramhall composed some of the music, and we used some well-known music such as the Indiana Jones music and the Channel 4 music. Our costumes included sandals, shirts and trousers with big camping rucksacks.

The Shyster Shadows were a group who were trained up by the original Shyster members. ‘My Bloody Valentine’ was a film which involved myself and another Shyster shadow member who played my lover. In the film, disasters kept happening and everything kept going wrong for the characters. There was a lot of slapstick comedy and romance. As a costume, I wore a shirt, jacket and trousers. Music with lyrics was incorporated as a soundtrack when the film was made. We won an Oska Bright award for the film, and we all travelled down to Brighton for the ceremony.

‘Stop the Bus’ was a free touring event performed by The Shysters in day centres and conference centres for staff and the public. We set the chairs out like a bus and all stood up and spoke about our hopes and dreams for the future. I talked about how I wanted to be a violinist like Nigel Kennedy, and pretended to play the violin. We used Art of Noise music and we didn’t have costumes.

‘Tip of the Teeth’ was about people with learning disabilities having fears about going to the dentist. The idea came from John Tipton who told his story about how he didn’t go to the dentist, and we made up improvisations about it. We were trying to show healthcare practitioners that there is a person behind the disability and we have the right to be heard. I was involved in the nice, ‘fluffy’ scene – there was also a ‘nightmare’ scene which another of the actors took over. We worked with the Grapevine health team and took the show to day centres and had the chance to talk to local dentists. We used music by the Little Death Orchestra.

‘Tears’ was part of The Shysters’ tenth anniversary production, and followed on from ‘Shards’. It explored the themes of heartbreak among people with learning disabilities, and how we experience hurt but may not show it in the same way. We performed in a church and used buckets, cloths and umbrellas and we made it look as if we were on a boat. Life is never perfect and there are always ups and downs, and this was a show that reflected those ups and downs.

Over this time, we went to see shows at The Hippodrome and used them as inspiration for workshops and performance pieces with Open Theatre. We took some sessions into schools such as Oscott Manor, Hallmoor and Selly Oak, and then the participants had the chance to come to the theatre. Some of the music we used was from Edward Scissorhands and Slava’s Snow Show. I enjoyed supporting the young people and giving them confidence, and my favourite part of performing was playing the ‘Sad Clown’.

This show was about love, betrayal and heartbreak and was directed by Kathy Joyce. We took it on tour around The Midlands.

Shyster Street was a TV series that we were going to have for Channel 4. There were lots of scenes and we all played characters who were living on the street behind different doors. My character was a romantic. The music was from Richard’s CDs including Kronos Quartet – Nuevo.

Some of The Shysters were involved in this project, working with children from Worcester schools and with the Birmingham Hippodrome. We all had to pretend to be animals and improvise by making animal sounds, using a lot of music. The show was directed by Richard Hayhow and performed in the Patrick Centre in the Birmingham Hippodrome. Jasper Carrott came to see one of our performances!

Baubles was a Christmas show directed by Kathy Joyce. The costume in this production was fabulous and out of this world – I wore a massive, heavy coat. Some of the scenes showed the characters being indulgent; the piece explored love, romance and other themes that aren’t usually explored by actors with learning disabilities.

The Shysters were involved in this production and performed on the main stage at the Birmingham REP (along with Matthew Kelly). Kathy and Richard worked on it and some of our scenes were incorporated into the show after a two week rehearsal process. It was a musical set in Spain, and the music was performed by an orchestra.

We were inspired by a number of scenes in productions at the Birmingham REP such as Of Mice and Men, The Wizard of Oz and The Witches, to create new work with schools in Birmingham. Some of The Shysters supported some of the young people in schools, and eventually we performed on the main stage at The REP to teachers and parents.

These projects were linked to Imagineer Productions and were all outdoors. My first carnival involved pushing a float up to the memorial park in Coventry. We also travelled to London together as part of the Lady Godiva Awakes project in 2012. Another project in Summer 2012 was in Coventry University Square and I dressed up as a hummingbird and performed with professional actors.

Cops and Robbers was a silent movie style film which began in The Belgrade Theatre and involved a vase getting stolen. We worked with Told By An Idiot and rehearsed for a few days before filming in a number of locations in Coventry. It was challenging not to use music when we were filming, as it was a new way of working.

We devised this show and used different people to play the same characters; we had a young Hansel and Gretel and an older Hansel and Gretel. The show wasn’t a comedy – it was a dark version of the fairytale. We used Philip Glass music. We performed in the Herbert Art Gallery and on the Deedmore School site. This was one of my favourite performances because it felt special to me and it felt powerful for me to perform as the father character.

There were 4 films made as part of the murder mystery ‘Whodunnits’ project. One was at the Roman Fort where I played the rebel who was blamed for the murder in the story. We used mime, and I had to brush my hair back and paint my face with blue and white paint. I was also involved in the films made at the Coffin Works and the Black Country Living Museum. Another film was made in Aston Hall, and I supported the young people who were involved. This was an Open Theatre project and was supported by the National Lottery Heritage Fund.

This was a spin-off performance inspired by the Christmas show at The REP which was Peter Pan. It was an immersive, multi-sensory performance in which the audience went on a journey and met different characters; I played the mermaid and I had a brilliant costume and mermaid tail. We did six shows on one day and five shows another day at The REP before taking it on tour to Wilson Stuart School and The Meadows School. We had to postpone some of our school performances due to the pandemic.

This was the second community cast performance that I was involved in. Some of the people who worked on it were Richard Hayhow, Michael Murphy and Judith Higgins. We started with a weekend workshop in 2002 exploring stories from The Bible, and then moved onto weekly sessions leading up to Easter. Some of us spent some time in Galway working with the community cast there. I overcame the challenge of travelling on a plane which I had never done before. We performed for 3 weeks in the Coventry Cathedral Ruins, and I played Jesus. It was very dark and some of the music was composed by Derek Nesbitt. Some of the set was operated by the community cast, for example Noah’s Ark. 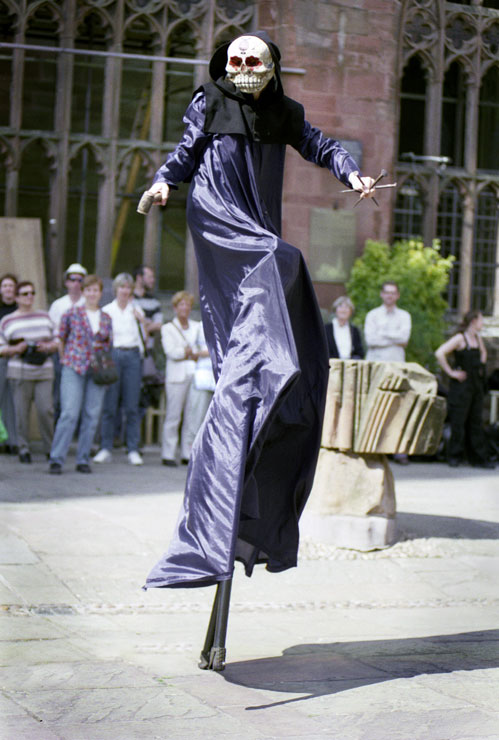 It was about love and forgiveness. Richard was director, Maxine was a choreographer.

I played a gangster with a leather coat. This is when I became Shyster. It challenged me as an actor as I had to learn quickly. It premiered at Wolverhampton, then we went to New Vic, we went up to York, we went to Nottingham, went to Bradford, then we took it to Edinburgh Fringe in 2004 for 3 weeks, and we stopped in this amazing house. It was a lovely house. I think we were like sleeping in these rooms on different levels the house was so amazing

Midsummer Night’s Dream was the best start to an epic career. I was in the Community Cast playing a fairy, but we were on stage with the main professional Shysters. We started out performing at the Herbert Art Gallery and then moved into the Belgrade Theatre on the main stage for 3 weeks in October. It was a magical piece of theatre – Kathy Joyce played Titania and her costume was made out of loads of blank CDS, it looked amazing.

Hello all! We hope you are keeping safe and well in these confusing times. We thought that the second blog... END_OF_DOCUMENT_TOKEN_TO_BE_REPLACED

END_OF_DOCUMENT_TOKEN_TO_BE_REPLACED

Hello everyone, and a very happy International Women’s day to you all!  I have been writing blogs for Open Theatre... END_OF_DOCUMENT_TOKEN_TO_BE_REPLACED