Tom ‘N’ Rob are a physical theatre/dance duo whose work challenges perceptions, breaks down barriers, and encourages acceptance of difference.

Their first piece ‘Tom N Rob: Break Free’ was a joyous theatrical journey of friendship and creativity. Now the pair have found a new way to share the joys of their friendship, through their love of Super-Hero films!

After the premiere of ‘Tom N Rob: Break Free’ in March 2020, the pair have been on a different journey together. Discovering how to stay connected and creative as a dance duo who couldn’t share the same physical space.

The result of that journey? ‘The Amazing Spying Iron Spider Kickbutt Rangers!’

We wanted to ask Tom and Rob about the inspiration behind the film, the challenges of adapting their creative process during 2020/21, and find out what adventures their super-hero capes will take them on next…

When lockdown started, the pair knew they had to stay connected and so the zoom sessions began. “Initially it was just to give ourselves a bit of positivity.” Rob explains, “All our practice before was about touch and response. All of sudden that stopped.”

The challenges that we have all faced on zoom, slow internet, working out how to mute and all the other joys of trying to work online were heightened when trying to move together via a screen! The pair found that their action and reactions were slower and admit …

“We didn’t know what to do – we were just dancing and having fun!”

So, how did Superheroes find their way into Tom N Rob’s zoom world?

Like a lot of us, Tom is a huge Marvel fan and during lockdown was watching a lot of Marvel movies. In fact, Tom has been secretly trying to sneak fighting sequences into Tom N Rob’s creative work for a long time. “We actually ending up cutting a whole ‘Kung Fu Fighting’ section out of ‘Tom N Rob: Break Free!” Rob reveals.

The super-hero theme did mean the pair had some very fun homework of watching Power Rangers, Captain America, Kick-Ass, Iron Man, Spider-Man, and other superhero films. “It was keeping Tom engaged and excited so he took the lead and we started watching films and discussing them and using their movements.”

You’d be forgiven to think that now is the time to make a piece of work that reflects the struggles and challenges of the last year. But Tom N Rob decided differently.

“We’re not making a big statement – we’re having fun and doing something we really enjoy!”

Rob explains the pair’s thoughts behind making a fun, superhero film during a pandemic. “We just wanted to make a cool film. So much work coming out of lockdown is very deep and we wanted to come out of lockdown and do something fun!” It’s clear is that both Tom and Rob have loved the creative process of working on a superhero-style film.

“Everyone in their life wants to be a superhero at some point.”

As artists making a film during lockdowns has been tricky, but has also given the pair a chance to explore new ways of expressing their creativity. “Filming made me feel famous,” Tom told us when explaining how the filming made him more confident in his abilities and re-affirmed his love for performing. 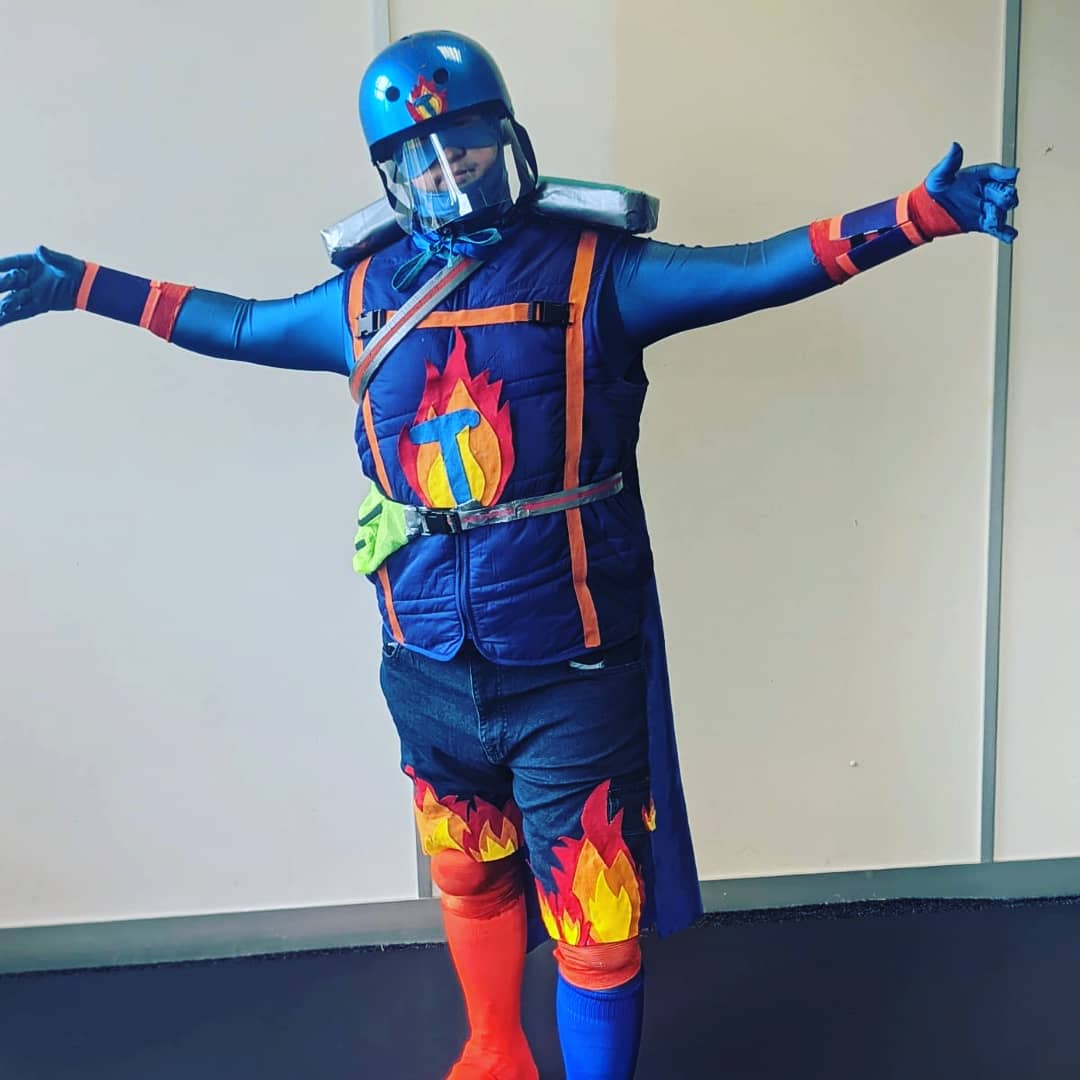 Artistically, the film has been informed by the way the pair were forced to work on zoom. There is a lot of mirroring and working face to face, so aesthetically the film will look and feel different in direct response to adapting to rehearsing during lockdown!

When asked what the biggest challenges of the whole process were, it was a combination of working in a site-specific environment. The pair shot on location for the whole film, so not performing in one set theatre or studio space and adapting to new environments (and sometimes dealing with nosey members of the public) was a different skill to master.

Plus, Tom N Rob didn’t get to rehearse with their amazing superhero costumes until the first day of filming! Those costumes are a real highlight of the film, but performing in a new outfit is always a challenge for any performer – let alone on a tight filming schedule.

For Tom, adapting to these new ways of working was difficult but as a skilled improviser, he made it work! “Tom took a lead on set rather than in the pre-production process and took ownership of his role during the film,” Rob tells us when discussing what managing so many changes and challenges pre-production was like.

As with all things in 2021, things were constantly changing. Timelines shifted and rules around social distancing and mask-wearing were shifting too. Despite this, Tom and Rob have managed to create a film that they are proud of and will bring pure entertainment and superhero fun to all who watch it!

Finally the question we all want to know to know the answer to… will there be more films from Tom N Rob?

Tom and Rob are in agreement on this one; “There will be more films but we want to get back into the theatre too!”

No matter where they’re performing, we can’t wait to see what Tom N Rob will do next!

To find out more about ‘Tom N Rob: Break Free’ and Tom N Rob’s unique devising and performance style, check out our blog.

When is Blue Monday? Blue Monday is usually the third Monday of every New Year and is considered the most... END_OF_DOCUMENT_TOKEN_TO_BE_REPLACED

Ronnie & Johnny is a sitcom with a difference. Sure, it has all the classic hallmarks of a TV sitcom;... END_OF_DOCUMENT_TOKEN_TO_BE_REPLACED

Hello everyone and welcome to our December edition blog! This blog will be a little different because we are going... END_OF_DOCUMENT_TOKEN_TO_BE_REPLACED

What is the book about? ‘When I grow up I want to be a cat’ is all about surviving the... END_OF_DOCUMENT_TOKEN_TO_BE_REPLACED