“I am not a tragedy” and “we deserve better” are strong words spoken by Houting at her Ted Talk at Macquarie University in Australia. Houting begins by explaining that the way human beings think about the world changes as new evidence is shown to us. She starts using the example that human beings believed that the world was flat until evidence revealed that this was not the case. Relating this to Autistic people Houting describes that the way humans are taught about Autism is that Autism exists because there is “something wrong” with the way that the Autistic brain works. That Autistic people have “deficits” or weaknesses in certain areas. She describes that this is because research is based in something called the Medical Model. A model which is based in scientific research and aims to discover how to use science to fix or solve medical ailments that humans have.

A new model was developed called the Social Model which describes how instead of there being something “wrong” with an Autistic person, the environment that they are in does not cater properly for their needs. Houting uses the example of a shopping centre and states that as an Autistic person she finds them “too loud and unpredictable” if shopping centres were made quieter and only had few people in them then she would cope better in that environment and it would be more suitable for her needs. Some shops in the UK now have Autism friendly shopping hours or at least they did before the pandemic.

The first thing I thought when I watched this Ted Talk was “damn I wish I had watched this when I was younger.” If I had I may have developed a healthier view of myself and better self-esteem. When I was at school I was taught to believe that there was something “wrong” with me. I was separated from Neurotypical children and I learned in a ‘Special Learning Centre’ for a lot of my education. This made me feel different and other in society. I then went to University where I was treated as an equal but I found this overwhelming and developed unhealthy coping strategies to combat my anxiety disorder. This had developed growing up through believing that I was “odd, weird, different, a freak of nature” as I was called at school. 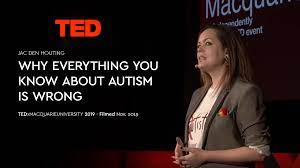 University made me want to understand who I was. It made me want to understand why I was different and why loud sounds hurt my ears. I knew I was Autistic as I had my diagnosis from the age of eight. My diagnosis made me feel resentful. It was something that was given to me. I did not choose it. It was not my fault others reacted differently to me. It was that label I had been given, it came with a preconceived idea as to what an Autistic person would be like. They would be highly disabled and slow or so the majority of society believe. I was not the stereotypical idea of what an Autistic person ‘should’ be like. I was an actor and I was studying for a degree. Sometimes I talked too much if anything. Autism was a word that was given to me by the world and I wanted nothing to do with it at one point. I was not Autistic I was a ‘normal’ human being.

Now, I am in my early thirties. I ask the question, what is normal? When I see individuals wearing masks over their mouth and not their nose despite being told for a year how to wear them correctly I ask; is that normal? When I see individuals ridiculing each other because of gender or race or being verbally aggressive in shops I ask; is that normal? These people don’t all have Autism surely? Or the bullies that sat in the back of the class and did not want to learn; is that normal? No of course it isn’t, so what is? Ultimately, I still see myself as a human being like each and every one of us is, but I do not struggle so much to identify with the Autistic label. I would much rather be Autistic than a person who bullies another because of their race or gender.

Houting finishes her talk by stating “we need a paradigm shift in the way that we think about Autism, we need to recognise that maybe acting less weird is not the best outcome for an Autistic person. We need services and support that will help us live long, happy and fulfilling lives. Whilst respecting our rights to be authentically autistic, and we need the kind of work that she does. Research led by Autistic people that answers the questions that Autistic people want answering, because the earth is not flat and I am not a tragedy.”

I agree completely with her statement. Autism is not something that will ever be cured or will ever disappear and would we want it to? No we wouldn’t, because Autism makes the world a more interesting place and it would be a shame to silence all who are different from ourselves. Instead let’s recognise difference, let’s support it and let’s change the way people think about Autism. Let’s do difference differently.

To watch ‘Jac den Houting: Why everything you know about autism is wrong?’, click here.

END_OF_DOCUMENT_TOKEN_TO_BE_REPLACED

Hello all! We hope you are keeping safe and well in these confusing times. We thought that the second blog... END_OF_DOCUMENT_TOKEN_TO_BE_REPLACED